Note: The TTC provides the Crisis Link program through a poster and payphone at every subway station. Phone calls are free and confidential. Callers will be connected to counsellors at Distress Centres of Toronto. If you or someone you know are struggling with their mental health, help is available. Call Talk Suicide Canada 1-833-456-4566 and for youth Kids Help Phone 1-877-974-1067.

Interview by Sherwin Lau and Jean-François Obregón (A Voice for Transit) // January 18, 2023

Jean-François met Saheel Siyam, a bright 11th grader, at the TTC’s 100th anniversary celebration in August 2022. He won a design contest run by the TTC, where he proposed and made prototype platform safety barriers. We were impressed with his initiative and caught up with him a few weeks later. This is a follow-up to our August 2022 article about safety barrier doors.

A Voice For Transit: Tell us a little bit about yourself. What led you to the TTC 100 contest?

Saheel Siyam: Well, honestly, I didn’t find the contest myself. My mom found it on Facebook, so she said: “Maybe you might want to check this out.” So, I looked at it. And firstly, I wanted to build something like new subway lines because I was interested in that a lot as a kid. But, eventually, I realized that a lot of people are probably going to do this kind of thing. And, I was right. I saw a lot of subway maps at the event. So, instead, I started to do something about platform safety barriers. I was inspired by platform safety very specifically because I saw events on the news where people got pushed onto the platform areas, and I thought it was really tragic. (I was) surprised that it didn’t already exist. So that was why I went into platform safety barriers.

AVFT: How did you feel when you heard that you were called back regarding them wanting you to set up your project?

Saheel: At first, I wasn’t too surprised because, to be honest, there weren’t that many entrants in the contest. It wasn’t all that popular even though it was marketed. There were some categories that went completely unfilled. The odds of winning were pretty high for any given person winning the contest. But what really surprised me was the fact that the Mayor was actually coming over to distribute the certificates even though there weren’t many winners. The TTC obviously put a lot of effort into the  event and had a lot of old vehicles on exhibition. It was, however, a big event, even though there weren’t many contestants. Huge turnout, though. 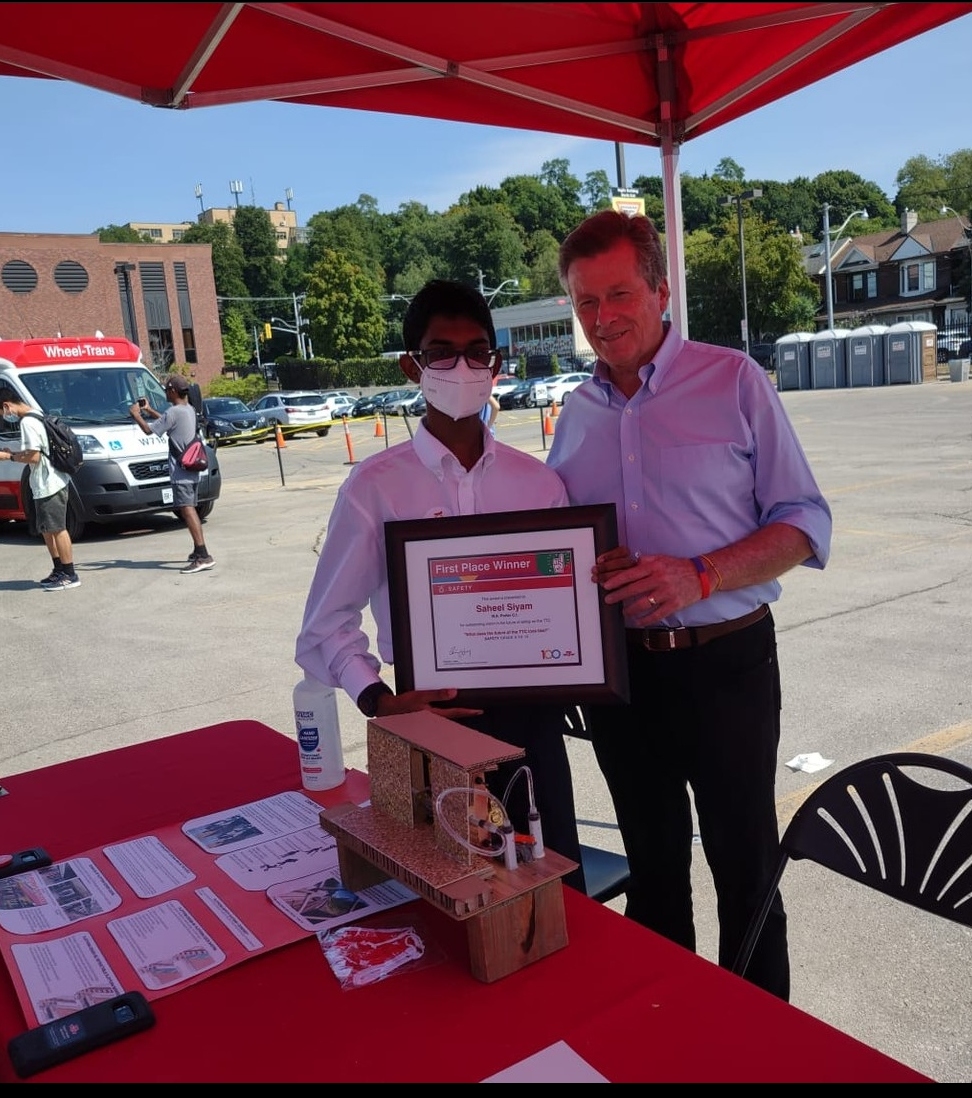 AVFT: I heard you mentioned earlier that there were some events in Toronto recently that led to talk about more platform safety features that we needed to have. Why did you have an interest in [PSDs]? Did you have some relationship with platform safety doors before this event?

Saheel: Before this event, no, not at all. I wasn’t really interested in (platform safety) doors. I knew somewhere in the back of mind that something is missing in Toronto’s subway system, but I couldn’t really place it. But then I realized: “Oh, wait! It’s the doors!” After these events. “[It’s] the doors. We need the doors.” But, before that I wasn’t super interested in platform safety as a category. These events (are what) motivated me.

AVFT: Have you been to other cities to have subway stations with platform safety doors?

Saheel: I have been to Melbourne, but I do not think – It’s been a long time. It’s been 10 years since I lived there. I lived there when I was a kid. They did not have platform safety barriers then, I think. Maybe that’s changed right now. Their subway system is way more complex than what we have here. It’s more similar to New York. They have a huge, gigantic network of stations everywhere. It’s more like the GO transit network rather than the TTC network. So it’s huge, but they didn’t have any platform safety barriers there. In the airport here, you have it.

AVFT: Do you think we need them here?

Saheel: Yeah. The statistics are pretty depressing. There are people who die every year on the TTC. I’m pretty sure they were suicides. Just suicides are over 200. [Between 1998-2015 on the TTC]. So, we’re not counting events where, for example, elderly people fell onto the tracks by accident, or like people that a stroller fell down. Sometimes, subway stations get closed, or whatever, but they never actually tell us why. I think they might be hiding some of this stuff. Yes, people are falling on the tracks, because the statistical chances are very high of falling onto the tracks. I think they’re not actually being really transparent with us on how many people are actually falling on their tracks accidentally.

AVFT: In Japan, in Osaka, I believe, they started before putting up safety barriers, they put the posters on the wall, deterring people from taking their own lives and reminding them that there’s things that are worth living for. And, that deterred suicides by a huge percentage. Do you feel like we should have more deterrence or safety features everywhere in Toronto, as well?

Saheel: Yeah, I think so. I think transit suicide is a a huge problem. So, I think it’s not just Toronto – internationally – if they worked in Osaka, there’s no reason it shouldn’t work in Toronto. It just feels unbelievable that a simple poster would be able to change that statistic. But, it might work. The way people think, even a small affirmation might change someone’s mind. So, I think those posters might help.

AVFT: Why do you think Toronto is missing safety berry doors, personally speaking?

Saheel: The TTC is an extremely old system. So, it makes sense that it’s going to be hard to install the system in very old infrastructure. Some of it is well over 60-70 years old. Some parts of the subway are extremely, extremely old. It takes a really long time to roll out some technology, especially I noticed with streetcars. But, I think Toronto just has a problem with rolling out new tech. Then, I figured out another reason was because of politicians. The transit thing is really messed up in Toronto. The development of transit projects. It’s so messed up by politics. Because different politicians argue about what to do, and then projects go nowhere. The Ontario Line was pushed back and forth, back and forth [for] 30-40 years, and now they’re actually starting construction. Only now have they actually started to work on getting rid of Line 3 [Scarborough Rapid Transit]. It’s a combination of [the] infrastructure being old, politics, and lack of funding.

AVFT: Where have you seen these safety barriers the most? And where do you think this is most impressive? Which examples?

Saheel: Predominantly, I see a lot of these barriers are present in East Asia, like in Japan. Apparently, China has many of their stations outfitted with platform safety doors. Japan, Korea, Taiwan, they have it, as well. I think they have it high in Southeast Asia. They’re even starting to roll them out in parts of India. Europe has them. North America does not have much of them. So, it seems like North America is extremely behind when it comes to platform safety barriers, because a lot of countries in the world have. Most regions in the world have some form of platform safety.

AVFT: So, you know the difference between safety barrier doors – the glass up and down the doors – and platform safety barriers, right? Which one do you like more?

Saheel: By the glass one, you mean the concept curbs in Bloor-Yonge station. The one you sent me the image of. (See rendering below) It would be better to have a hybrid. Something that’s fully glass like that seems so fragile to me. So, you could have the second design. [See photo below] You would restrict the amount of air going into the platform, but still keep some kind of ventilation. But, not having it too fragile and not investing a huge amount of money. But, gates like the second ones would also work better than the first one because you would save money and not have to construct it as high. But, it would still serve the most purpose.

AVFT: Since you have such an interest in transit, what’s your dream job? Would you be interested in designing stuff for the TTC In the future?

Saheel: My primary interest was the subway lines – just to like maps and stuff. I always had an interest in maps almost to the point of obsession. My dream job does not unfortunately have anything to do with transit. This project I was intending to be like a one-off. I think it’s an issue [platform safety] but, it’s not something I’m intending to dedicate my life to. I really want to go into the IT sector – build computers, video games –  I want to start a tech company. I built an app. It’s on Google Play. My Dad helped me with it. It’s called Bacterial Identification Application. It’s a basic app. It’s buggy.

AVFT: What about the inspiration for the safety barrier doors that you had at TTC 100? What inspired you for that one? Like the design hydraulics.

Saheel: The hydraulics. Originally, I wanted to make a battery-operated door. It would have been certainly possible for me to do so with some efforts. But, honestly, the hydraulics was not my idea. That was my dad’s idea. So, he said that the hydraulic system would be smoother. As we tested it out, compared with the battery-operated door, a hydraulic [door] does have a smoother motion than a motorized door. The air gives it a bit of a cushion and a buffer. The hydraulics seem a bit better than motorized, at least for a model. And one reason you said that the hydraulics is good is because you didn’t spend much energy. It was triggered by the weight of the train, so the actual energy electricity used would be none. It’s all green. It’s zero energy in a new sustainable era. We did have problems designing it. When we first designed it, the doors opened the wrong way. When the train left, the doors opened. When the train arrived, the doors closed. So, we had to rearrange it when the doors were opened. We had to invert the direction of the syringes, and then we had to recalibrate to the exact pressure level to make the doors open at the exact right time and make it align perfectly with the platform and the doors.

AVFT: I see that you have animation design as a profile picture. [On Instagram] Are you into Anime, as well?

Saheel: Honestly, that one is not from any known anime. I drew it myself. I wasn’t super interested in Anime until a while ago. I finished Avatar. I’m almost done watching Toradora! It’s a Slice of Life anime. It’s not very common or popular compared to like One Piece and Arugo.